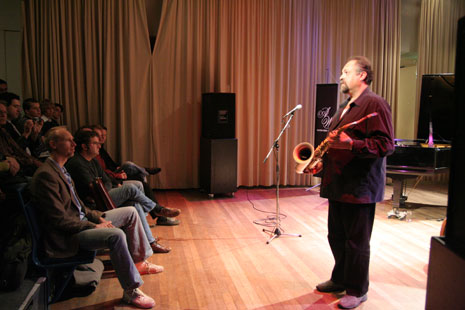 Lovano gave a very inspiring master class. He spoke about the ideas and creativity behind his music. Lovano played together with dutch saxophone players, he explained to them how they could improve their skills.

Lovano also spoke about his Borgani tenor saxophone, which he has been playing for the last seven years. Before that, he played on a Selmer Balanced Action tenor saxophone – which was given to him by his father ‘big T’ Lovano when he was fifteen.

This was his main instrument – although he sometimes used a Conn Chu Berry and a King Super 20 tenor – all his life until he found the Borgani tenor.

In his own words: “I love playing this tenor because it’s made like the earlier horns were, in the style of a Chu Berry Conn tenor, or an early balanced action Selmer, and more reminiscent of King Super 20.”

The Borgani Lovano model – exact the same instrument Joe plays – is for sale in our store.